Beauty and Horror: A visit to Sri Lanka

The title was taken from a recent commentator on visiting Sri Lanka while the war between the dominant Sinhalese and the breakaway Tamil Tigers was still underway.  The war, the horror part, came to an end in 2009, as a result of a crushing defeat of the Tamils by forces loyal to the current President/Stongman, Mahinda Rajapaksa.  Some would say that it was much more than a defeat, but a slaughtering of several thousands of unarmed, already surrendered combatants.  In any event, even such horror was only a culmination of 30 years of destruction and civil unrest.  And, more horror, the great tsunami of December 2004 hit Sri Lanka nearly as hard as it did Thailand and Sumatra.  The whole country was exhausted and wishes all of that past.

Much reconciliation is strenuously underway and large sums are being spent to rebuild the north and east of the country (Tamil territory) and to ameliorate long-standing oppression of the Tamil minority. This reconciliation effort is drawing inspiration and technical support from South Africa’s famous “Truth and Reconciliation” experience.  To the mind of some in the West (particularly the US State Department), this effort is not yet adequate and much truth is still not revealed.  Our group of Asia Foundation Trustees was treated to an hour long “conversation” with the Sri Lankan Foreign Minister (he spoke for about 55 minutes of that hour) where he was eager to decry what his Government views as the disproportionately negative stance by the US and its impatience with Sri Lanka’s efforts to bring thing right.  “You abolished slavery 150 years ago…and look what problems you still have.  Our war ended only 5 years ago”.    In so many words…”Give us a break!”

Meanwhile, Rajapaksa and several brothers and his son run the country in a form of family despotism.  The government is formally a democracy and the regime could theoretically be ousted, but the majority Sinhalese are reasonably content.  More disturbing: dissent is suppressed, political opponents are assassinated, and religion (think rampaging Buddhist monks) is used to alienate minority Christians.  To many Western observers, the rule of law and civil rights seems greatly threatened; to most Sri Lankans, this is much better than war.   Their economy is, for the region, strong.  Per capita GDP is at $6200/yr, on the verge of the middle range of all countries.  Poverty and unemployment are low.  Some say that Sri Lanka’s 300,000-strong military (from a total population of only 20Million) is not only designed to support the Rajapaksa authority but as a full-employment tactic.   Literacy and access to quality health care is high.  In contrast to most places in India, for example, the streets are clean, there are no beggars, traffic moves in well-behaved fashion (people actually use turn signals and honking is rare!).

The modern world has caught up with Sri Lanka demographically as well: birthrates are less than at replacement levels. Whether this bodes well or ill for the country depends largely on what the giant players in the region (China and India) do to play Sri Lanka’s position to their respective advantage.  If, as the regime hopes, Sri Lanka becomes a Singaporean style, value-adding entrepot on the key Indian Ocean sea lanes, a small, highly educated, English speaking population can be a huge advantage.  Remaining a “colonial-style” economy, reliant on raw materials exports (tea, rubber, coconut oil and fibre) would leave little room for success in an increasingly competitive world. The Chinese are investing heavily in iconic infrastructure (the new highway from the airport to Colombo, major sports stadium, new ocean port, several world class resort hotels and casinos, repairing the ring railroad built by the British and largely destroyed by the tsunami).  India plays little visible role; but, immense and close, it’s hardly ignored.  The US plays a very subtle role, promoting good governance, free trade policy, and regional cooperation.  Not sure that’s a match for the swank new cricket grounds, Rajapaksa Stadium, built by Sri Lanka’s friends in China. 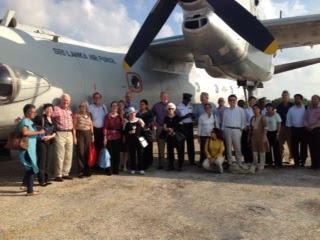 The Tamils and Sinhalese speak different languages; all highly educated persons speak English; and all signs are in 3 languages (Sinhalese first, then Tamil, then English…in the South; Tamil, then English, and only sometimes Sinhalese in the North and East).  The Buddhist Sinhalese were the first to arrive from India, many centuries ago, displacing completely whatever aboriginals peopled the island. Shrines to Buddha abound in Colombo.  The Hindu Tamils came later and populated the edge closest to India.  Their temples (now being reconstructed) grace Tamil towns, like Jaffna in the far north.

But, it’s only in recent times that the country has been in control of itself.  First the Portuguese, then the Dutch (“Zeilan”), and then the  British (“Ceylon”), each for about 150 years of colonial dominance and exploitation of spices (cinnamon) and tea (originally coffee, until the coffee plantations were wiped out by a blight).  The Europeans left some of their religion (many Christian churches in Colombo), massive colonial administrative structures (especially the British, at their 19th Century zenith), and highly sought after private schools,  And they left some of their names, or so at least the Portuguese, who apparently didn’t worry about intermarriage like their more uptight northern European cousins;  Da Souza, Pereira, De Silva, Fernandino are not uncommon.

I began with horror, let me end with beauty.  Island Sri Lanka is green, lush, surrounded by beaches, with a central highland of mist covered hills where, some say, the world’s finest teas grow and cinnamon bark is harvested to sweeten the lives of many millions everywhere in the world.

This entry was posted in Uncategorized. Bookmark the permalink.